On Determination and JJ Watt

on September 14, 2015
This post doesn't have much to do with writing, but a different sort of "dream" one I never thought would happen.

I wouldn't call myself the biggest NFL fan in the world, but I do enjoy spending my Sundays on the couch with my husband. I have only one real favorite player, JJ Watt. Of course, three years ago when I saw JJ sitting on the sidelines of a game and demanded of my husband, "oh my God, who is that," it was because he's obviously handsome. The more I got to know about JJ, he impressed and inspired me with his attitude. He refuses to settle for anything. As one of the best players in the NFL, he continues to push himself further and further. He also inspires his team members. Watching the Houston Texans on Hard Knocks, in nearly every episode you'd find JJ, giving encouragement to his team mates, often rookies who didn't end up making the team.

Seeing as JJ plays in Houston, and I live in Virginia, and even when he played games nearby it was out of our reach financially, I was content to watch the games. Then about three months ago, I was scrolling through Twitter, I saw that the Texans were coming to Richmond, Virginia, forty minutes from my house, to do a joint training camp practice with the Washington Redskins. Oh, and it was free and open to anyone who wanted to come.

I don't really believe in fate, or that there's some great overseer of the universe in charge of our lives, pushing the pieces around on a chess board. But at that moment, I realized: sometimes those crazy, off the wall things you never think will happen in real life? Happen.

Almost as soon as it was announced, I had an idea to create a piece of art for the gallery wall in my office (more on that in a future post). I hemmed and hawed over this, because what if it was terrible? Art is a new hobby for me, and I'm no Picasso. I decided to wear my brave, and who cares what anyone thinks? Just do it.

As we arrived at Training Camp, all these little reminders that this was really happening came to me. We passed the HBO Hard Knocks crew setting up. I was far from the only person wearing JJ Watt gear. I am not new to fandom, or to meeting celebrities. It has been a long, long time since I've been in that sort of situation, but it came back to me-but differently. I was able to enjoy practice, without worrying about what may or may not happen. I was just happy to be there. It's really cool to see NFL players play up close and personal.

Practice was three hours, and by the end of it, my husband and I were tired. I was ready to leave, after the players left the field. My husband refused to hear it. "Just a little longer," he prompted. "I think he's coming back out." 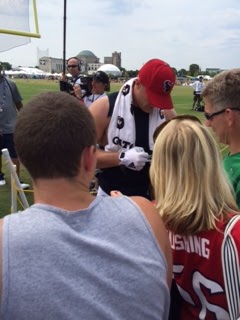 Most of the crowd passed us by. We'd been up since five am and it was now nearly noon. My husband kept his eyes on the field. I saw him smile, then he said, "JJ's back. Come on."
We ran over to the other side of the field, where he was signing autographs. Of course everyone wanted his autograph. Also? Because he was one of the few players who came out to sign.

He signed like lightning, telling young fans he couldn't stop for selfies, because he "needed to get to as many people as possible". I was to his right, he kept moving left, but I refused to give up. Finally, finally, he saw me, saw what I'd created and complimented me on it.
In the grand scheme of life, it's not much, really. I would have loved to have told him how his message inspires me to keep going, even when this writing journey seems to be taking forever. There wasn't time for it, there were far too many people, equally deserving of his attention. 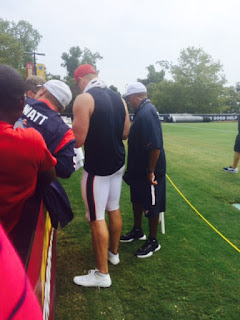 My day at training camp was one of the best ever. It was proof that no dream is out of reach. That I should be brave. Showing JJ my artwork? Was something I never would have thought about even six months ago, because art is just so new to me. It also proved to me how strong my marriage is. My husband was not going to let me leave training camp without that autograph.

Now when I look on my wall and I see proof that I shouldn't stop dreaming. As long as I don't stop working, I think it will happen. Probably not exactly how I imagined (because honestly, what does) but I'm closer now than I've ever been before. 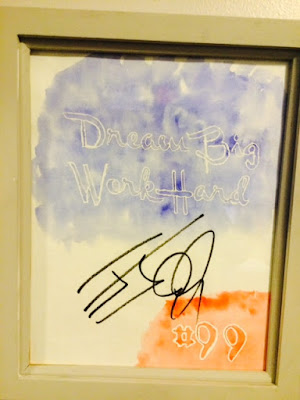 I can't believe it's almost Pitch Wars time again! Last year I decided to enter Pitch Wars at the eleventh hour. This year, I've decided to actually have my crap together. I'm so proud of myself! Let's get to it, shall we?

After writing several manuscripts set in the big city, this time I went small. My contemporary romance is set in a small town Virginia's Shenandoah Valley. Think quaint, perfect little mountain town relying on tourist dollars to keep the lights on. The townsfolk are more than a little particular about things being just so.

Our heroine is Cadence, but you can call her Cady. Her father's the mayor, putting her in a spotlight she's never much cared for. In a town of a thousand, the men are either blood relations or or one log short of a load. She's resigned herself to the cat lady life.


Our hero is an outsider. Noah is the big, burly quiet type, often told he resembles the Brawny paper towel man. He left city life behi…