The Best Spontaneous Decision Ever

on March 09, 2015
For me, spontaneous is one week's notice. During my dating days, I had a lot of pushy guys move on when I wouldn't meet them a day or two after starting a conversation.

Recently, I made a spontaneous decision. I was in Pet Smart, picking something up. My husband likes to look at the rescue cats they have in there. I do not. It's the same reason I avoid the display of Betta fish. I only have room in my house for two fish tanks. I cannot save all the fish, cats, dogs or other animals in the world. When I think about that, I get sad.

For some reason, this day, my husband drew me into this particular cat. He was sweet, pawing at the glass. I said, "What a cutie," and walked away to get what I needed. My husband said, "Aw, I want Milo." I grabbed what I needed, went back to the cages and looked at this sweet cat. Then I told my husband to go find an employee.

CRAZY. I do not do stuff like this. We met Milo, and he promptly backed himself into a corner. Gone was the bravado. The information sheet on him said that he had been in a home where he was neglected and stayed under the bed for a month. Even that did not dissuade me. This is not my first rodeo. They told us to think about it and come back.

So, we did. I thought of all the reasons I did not need a new cat. Our two cats got along for the most part. This new cat could change that. Our old girl, Isabel, is set in her ways. After losing two cats in two years, we switched to feeding them expensive, grain-free food. Could we afford to feed three?  At the end of the day, though, we went back, filled out the paperwork and brought him home.

It was only when we brought him home did the realization hit us. His eyes, his mouth, he looks so much like our dearly departed Quincy. 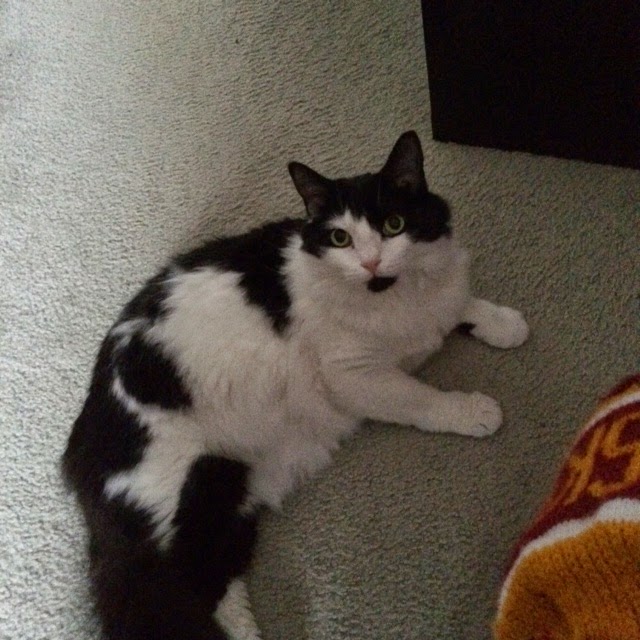 It's just the eyes and the nose. Quincy was short-haired, Milo is long-haired. But it just seemed so right to us. Milo was born two weeks after Quincy died. If I had any doubt, they were squashed then.

It's fun and stressful to bring a new friend home. We're letting Milo lead at his own pace. We hope he'll be with us for many years to come.