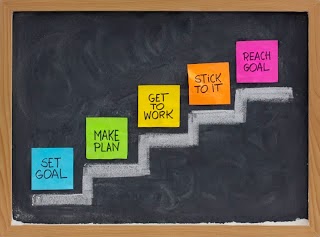 Query-Or Decide a Different Path
Other than the manuscript I spent the last three years on, I have other viable options. One will be ready for querying in early January. I plan to query again. If I end up no closer to my dream, I may submit to small presses, e-book only divisions of bigger presses or self-publish. I'm ready and open for whatever.

Step Outside the Box
Start posting online in writer's forums again. Take a yoga class. Do anything that will make 2015 different from years previous. I was somewhat successful in doing this in 2014, but I want to step it up a notch this year.

Continue Getting Healthy
I never set huge goals in this area of my life, as I think you're doomed to fail if you do. I hope to take what I've learned in 2014 and continue to lose weight and get stronger.

Shopping Ban
I want to start saving to get a new desktop computer in 2015. Because I'm a Mac user, it's going to take awhile. So, in January, I want to limit my shopping as much as possible until my birthday in late April. I want to take the money I usually spend on stuff I don't need and put it aside into a savings account so I can hopefully get a new computer and sell my old one for a couple hundred dollars.

Those are my goals for the year. Keeping it simple in hopes that I can succeed!