on September 25, 2014
The last year has been rough as far as losing pets go. In July 2013, I lost my thirteen year old cat, Charlie. In April 2014, I lost my dear cat Quincy. Then in July, I lost my my fish Chai. Losing the cats was heartbreaking. I had time to prepare for it, though. Chai was sick one day, and dead the next. Despite my cleaning and treating his tank. I couldn't understand what had gotten to him. I tested his water and all was fine.

Sometimes fish, like any creature, just get sick. It sucks. Life goes on. I cleaned out his tank, and let it cycle for a month before I got another fish. During this time, my second fish, Enrique, got sick AGAIN. The little jerk has been sick at least seven times since I brought him home a year ago. I treated him multiple times before putting him in a smaller tank for treatment. Fingers crossed, it seems to be working. His fins are growing back and his ornery spirit is back.

In August, I brought home my new friend, Mario. 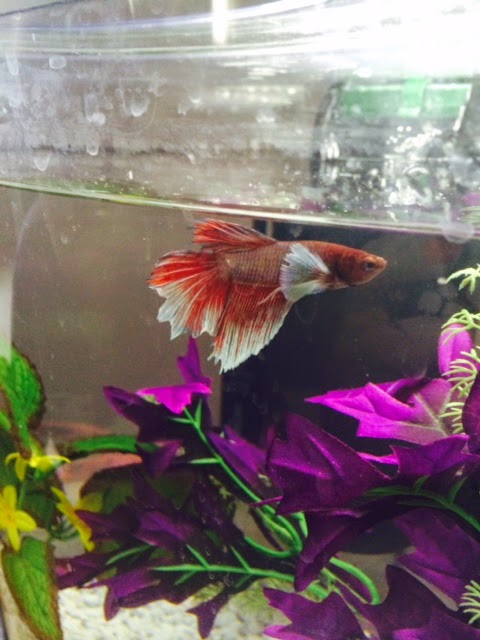 I guess I'm lucky in that the fish department of my local Pet Smart is staffed by people who seem to care about fish. They always have the garden variety of Bettas, like Enrique. He's a veil tale. I got him on sale for $2. When I got Mario, they had a ton of special breeds. I stood in front of the display, wanting to take several of them home. It's always kind of bittersweet, bringing home a new pet. You want to rescue them all.
Ultimately, Mario came home with me. He's a dumbo Betta. He's about 20% bigger than Enrique. His fins flutter beautifully as he moves. He's adapted very well to his new home. He sleeps about 90% of the time. He's lazy. He's grown about 10%, too.

I'm happy both of my fish are doing well. I look in their tanks and see the benefits of my hard work. My writing went through a similar rough patch. I hated everything I worked on. I couldn't get my query ready to save my life. Then one day, things just clicked. It was as though I'd been trying to push a wall out of the way instead of climbing over it.

Here's to hoping things will continue on a forward momentum for the rest of the year.