Getting My Life Organized: Part Two

on April 21, 2014
This year I've made it a goal to get my house organized. I'm not saying I was living in a sty before, but I could lose track of things. So far this year I've gotten my cabinets and bathroom closet organized, and I wanted to put in some extra pantry storage.

My kitchen is pretty small, and as much as I maximize the space, it's still not as much as I would like. I was raised by a mother who believed in the virtue of a stockpile. Her stockpile is something of wonder, and it takes up about half of my parents' basement. This concept can seem foreign to people who do their shopping every week. For instance, my husband wasn't exactly against the idea at first, but he didn't understand it. It's just not the way he was raised, and I get that. I would pretty much rather do anything but grocery shop, so if you're like me, having a stockpile means you don't have to go as often.

I won't go on about this, but I will say that it's worth to have a small stockpile on hand, as you never know when a storm will hit, or when you will suffer a financial set-back. Having a stockpile on hand means you can use the money you would have used for groceries on other things. In our case, we use that extra money to save up for a trip and to pay down bills. I'm no extreme couponer, either. Nothing against them, but I think the time invested to source all those deals and stay organized isn't worth it for me. We do a lot of our stockpiling at ALDI and Costco. And we also drive about an hour away to Richmond, to stock up on healthy fare at Trader Joe's and Whole Foods.

Last month I got the supplies to set up a "satellite" stockpile in my third bedroom. I got the shelving unit on Amazon, and the bins from the Container store. It's not completely sorted in this photo, but it's a good start. 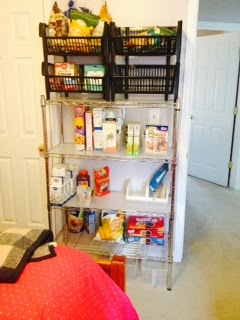 I'm coming along with my organization project pretty well. My bedroom closets and garage are next on the list, and I hope to have those projects done by the end of the summer. An organized house helps me have an organized mind. Well, I doubt I'll ever have a house that's neat as a pin. That's just not my way. But if I have things 80% there, that's good enough for me.