on February 18, 2014
I used to be a pretty sad excuse for a fish keeper. Most of them only lived six months to a year. I kept them in fish bowls, with no heating or filters. Now I do everything "right". Yet this winter has been difficult for me and my fish.

Enrique has been sickly since I brought him home. Part of it is because I think he wasn't bred properly, and the other part is because I think he's an epic jerkface who bites his fins because he's "bored".   I've tested everything in his tank, so there's nothing that can be causing his fins to shred. I fully admit I have become a fish nerd, because I'm planning on buying this fish training kit for him. Yep, those exist. I was surprised, too. But I'm hoping it will keep him entertained. 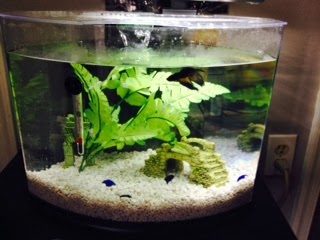 Anyway, he's been good for the last week or so, and when I went to take the photo for this blog post, I noticed a chunk of his fin was gone. I just changed his water today (and I do frequent water tests, so I know there is no reason for fin rot) so I just yelled at him and turned his light off so he can go into "rest" mode. I don't know how this fish can be bored. I sit in front of his tank several times a day, because it relaxes me, but I enjoy getting him to flare and just watching him. See how big his tank is? He's one fish in a five gallon. Yet, that's not enough for this little pain in my rear.

Then there's Chai. Until a week before Christmas, he's been my healthy fish. You can just make him out in the front of the tank, there. 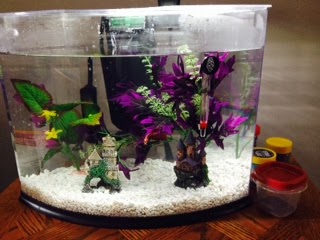 Right around Christmas, I noticed he'd picked up a case of fin rot. I went through his tank and discovered some funky stuff growing in there. He went into a hospital tank and I redid his tank. The funky, funky algae wouldn't go away, so I redid the substrate and cleaned the entire tank. Since then, fingers crossed, he's doing a lot better. Still not 100%, but well enough that I don't worry.

What does this have to do with writing, you may ask? Well, a lot, actually. I no longer freak out when I see that Enrique's fins are messed up again. They grow back, every time. I keep an eye on them, but I don't worry the way that I did. They're tough little fish, and I don't need to fret.

It's taken me awhile to get here, and I won't say that I don't worry about those things out of my control at all anymore, but cutting back on those worries has helped me a lot.  I've also learned a lesson in perseverance. Enrique got really, really sick around Christmas. So sick that I worried I would lose him.  But he bounced back after a few days, and I take this lesson into my own life. If he can recover from near-death, then I can recover from any writing setback I may suffer.

Now only if I could stop Enrique from biting his fins!