Living Life as a Question Mark 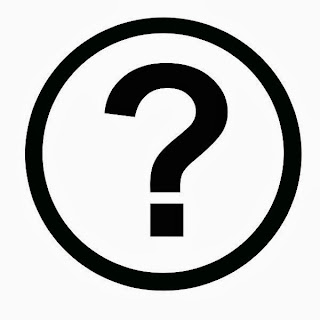 Life, by it's very nature, is unpredictable. As much as I'd love to be able to see years into the future, it would take a bit of fun out of life. I like being able to see only as far as my "headlights" will allow. That said, I'm currently in a period of my life where there are more question marks than periods. As I look back on my life,  these periods bring me a giddy kind of joy, but while you're in the thick of it, it can be a bit nerve wracking.

About seven years ago, I was at a cross-roads in my life. The job I'd spent the last five years at was changing. The company was planning on moving outside of Baltimore, farther than I'd wanted to commute. I told my boss, and he said they'd be happy to keep me on as an employee until the end of March, but after that, they'd need to hire someone else in order to have them ready to take over the office move.

That was both terrifying and exciting. Exciting because I could be honest about my job hunting with my employer and co-workers who rooted me on, but terrifying because I went on a lot of job interviews and it was mid-February and I was certain I'd be broke. Did I mention I'd already booked a trip to the SXSW festival in the middle of all this? Yeah. The job hunt frustration pushed me a little further out of my comfort zone. I started looking for jobs further out, and I landed interviews in DC. The next two months of my life were a whirlwind as I bid goodbye to one life, and began another.

I feel that way again, but only it's more exciting, because unlike that other job, the work I'm doing now is my life's passion. I've wanted to be a writer since before I could read. It's kind of terrifying to live like this, to know that even when the first question mark is gone, there will always be others. Like seven years ago, I'm giddy with possibility. Question marks no longer scare me.