On Fish Keeping and Writing 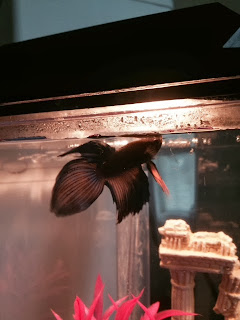 This is Enrique. He is the second of my two betta fish. I bought him because of his personality. Even in his tiny pet store cup, he was sassy as hell. He isn't a terrible showy fish, just dark blue with hints of pink on his fins. I put him in a temporary, one gallon tank and all was well. I upgraded him to a 2.5 gallon tank, with a filter and heater. A 2.5 gallon is the minimum you should keep a betta in, no matter what any pet shop employee says. At first, he was happy and healthy. Then I noticed tears in his fins, and fin breakage. I took anything out of his tank that could be causing the problems. I covered up the sides of his tank, because he was "flaring" (seeing his reflection, thinking it's another fish, and wanting to fight) and I thought he could be nipping at his tail in frustration.

I did water changes, added aquarium salt, and things seemed to be getting better for a few days. New tail growth. Then I looked in on his tank and saw a big chunk of that new tail growth was falling apart. I sat there, wringing my hands, knowing that I'd done everything right, so how could this still be happening?

Writing and fish keeping can be similar endeavors, if you think about it. I encountered a similar bout of frustration with my current manuscript earlier this year. I'd been working on it for over a year at that point, and I thought I was pretty close to where I needed to be. I got feedback from a couple of new people, and while there was a lot of good feedback, there was a lot of "nope, nope, nope." I carried on for a couple of months, until I had a bit of a break from the book. I felt a lot like when I looked into Enrique's tank. I was doing everything right, and somehow, it still wasn't enough.

In that case, I took time away from the book and came back to loving it. I took the vast majority of the advice which was given to me (ignoring those bits that I came to realize were well intentioned, but just wrong for the book) and re-shaped the book. It's now even better than it was then.

As for Enrique, I've realized that some things aren't my fault. It's possible he was a poorly bred fish, and no matter what I do, he may never be completely healthy. But I'm still doing water changes, observing, and treating him with medicine. He seems happy, he's eating, and his funny personality is still there. I'll do everything I can to keep him healthy. I'll try different methods and meds, and hope that he'll come out the other side healthy, and live a long, happy life.

In either case, there are things outside of your control. In this example with my writing, it's dealing with criticism and deciding which advice to take. In fish keeping, it's understanding that sometimes, even when you do everything right, your fish will get sick. All you can do is control your reaction to bad news.